I recently had the chance to talk with Lilyana Yakimova, the Director of Marketing at SiteGround about their new branding. A few months ago, SiteGround underwent a major brand overhaul and I thought it would be interesting to learn how a large web hosting company, with over 250,000 domain names hosted, approaches such a challenge.

How has the web hosting market changed since SiteGround launched in 2004? How do you think it will evolve over the next 5 years?

Many things have happened during the last 10 years. We have seen many companies in the hosting industry rise and fall, we have witnessed the silent gathering of large number of previously independent companies under the ownership of a single organization, as most other businesses we also felt the growing role of the social media. But I think that the most important thing that have changed over the years and that has a huge impact on the shared hosting industry is the ease with which one can build a website today. With the rise of the free application like WordPress and Joomla, and the appearance of many affordable hosted website building solutions the number of people that are able to create their own web site is skyrocketing. I see this as a long lasting trend, which the web hosting companies will have to take into consideration while planning the next few years as well. 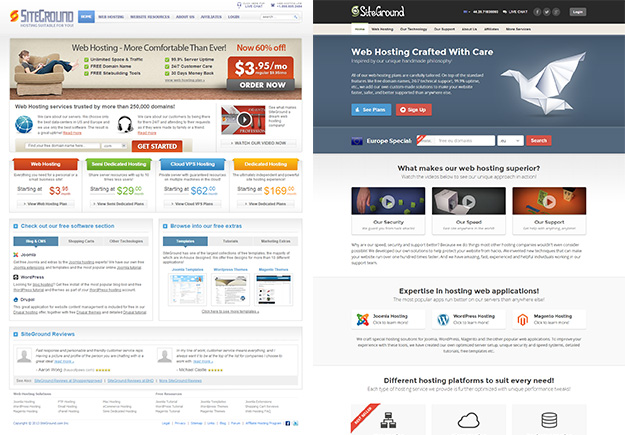 SiteGround Before (Left) and After (Right) Re-Branding

During the years we have managed to gather a very cool team of enthusiastic and extremely geeky people. Thanks to them SiteGround became one of the few in the shared hosting industry to invent its own technologies. These technologies help us achieve better quality than what is possible with the massively used ready-made solutions. To give you a small example how geeky we actually are, at some point back then, when most of the competitors rarely used server monitoring system or were extremely proud when their servers were checked once each few minutes, we came up with our own solution that checks if everything is OK twice per second. At this time this was 120 time faster than the fastest possible for the others!

This approach led to the fact that we built multiple technological innovations. However, the image of our company was completely indistinguishable from the other players on the market. We had a website that looks like all the others, our own customers were not aware of the innovations we have implemented, and as a whole no one outside the company knew what we actually do and how good it is. So this growing gap between what we really were and what we presented to the world was the main reason for the rebranding decision.

The first step, to show the world who we are, was to start using actively our blog and social media (FaceBook mainly). This was the easiest way to reach our customers, make a more personal contact with them, tell them our stories and turn some of them from users into followers. We also started attending and sponsoring many events and this was a great opportunity to spread our story even further. By the reactions we have seen on these events we knew that we are on the right track. We also changed our approach to launching new technologies. Instead of silently putting in place what we have developed, we started to create advertising and informational launch campaigns. For example, when the SuperCacher was implemented, we created a blog post, an easy-to-understand inforgraphic, detailed tutorial, informational emails for the customers and more. All of the things described above were part of our re-branding effort, though they happened long before the the website and logo redesign. Now we have completed visually the process and we have a clear general message to guide all our future communication activities too.

What is the message you are trying to communicate and who is your target audience?

The main message we wanted to communicate better was that SiteGround is a cool and technologically advanced company, which has a very unusual approach to doing things that differs from what most of the other players in our segment do. We chose to build this message around the idea of being hand-crafted as opposed to being a product of the mass production.

The shared hosting, where we compete, is the most massively used service in our industry. My favorite way to describe what we wanted to achieve with the rebranding is by using a restaurant business allusion. We and our competitors were like the fast food chains. With the rebranding we did not aim to change the segment we compete at. We are not aiming to turn from a hamburger shop to a classy French restaurant; actually we are more after the image of a boutique sandwich shop. What we sell is still a sandwich, but the bread is baked in our own oven, the lettuce is grown in our garden and as a whole what we give you is much better for you than what the mass-market competitors provide. By changing the image we aim to speak better to the same audience and attract more of the people looking for shared hosting, as they will see us as something better, no as one of many. We also aim to capture some of the audience that was previously ignoring the whole segment, as being too low, but can now see something valuable in the shared hosting too.

How do you handle negative feedback on social media and other public forums?

I strongly believe that no feedback is bad if you handle it properly. Actually, we have received some negative reactions during the rebranding process. Some of them have helped us correct some issues before launching the new site and logo, other helped us learn how to communicate change more efficiently. I think that the most important rule for handling negative feedback is to ignore emotions and get to the essence. I have learned that no matter how rude someone has been in stating his or her opinion, and no matter how much you do not liked it at the beginning, if you strip away the emotions you can usually find a valid point that can be addressed to make things better.

Do you think the rebranding has been a success and how do you measure that?

The marketing strategy we currently follow is definitely successful. The measurement is easy – since we started it we see a steady and growing increase in sales volume and revenue. However, the success is not achieved by simply changing the logo, adding a new message and re-designing the website. The strategy to start communicating more effectively our strong sides has started long before the re-design. Truth is that the visual change of the website was the climax of this rebranding and definitely led to most visible results. However, if there was no solid ground for the new message and if we have not started to gradually change the perception of the people before the redesign, the rebranding would not have been so successful.

What is the luckiest thing that has happened to/at SiteGround?

The luckiest thing that has ever happened and continues to happen each day is the fact that there are so many awesome people, who choose to work at SiteGround.