One of the smaller companies in the space, they are focused on the high end segment of the market with their cheapest plan starting at $100/month. Their infrastructure is entirely hosted on Google's cloud hosting. They appear to be laser focused on catering to clients that really demand top notch performance and are willing to pay for it.

These results are impressive. The worst issue was in the 51-100 range there was a tiny amount of errors towards the end of the test, resulting in a minuscule 0.13% error rate. As the tests scaled up from 2,000 to 10,000 users, Kinsta scaled well across price tiers and performed in the top tier of each price bracket.

The Blitz test is designed to make sure that static assets (which should be served from cache) are being handled properly and can scale to very heavy big spikes in traffic. Kinsta had 2ms response time spreads max and virtually no errors across every plan. It was incredibly stable and handled this test flawlessly at every price tier.

Kinsta was nearly flawless on both monitors with a minimum 99.98% observed uptime. Uptime wasn't tracked on most Enterprise level plans because they are just so expensive that it felt wasteful to run them for a long period doing nothing but monitoring uptime if the company had other plans in the testing which could also be measured.

I mention these because they are in the full testing but I won't bother putting them here. No company had any significant issue with either and it's not worth writing about. If you're very interested in seeing the geographical response times on WPT or what the raw computing power test of WPPerformanceTester measured, read the full results.

Kinsta put on another marvelous performance across every single price bracket. For the third year in a row they earned Review Signal's Top Tier WordPress Hosting Performance award. Since I don't have the graphical talent in house, I'm going to shamelessly steal one of their graphics which pretty much sums it all up. 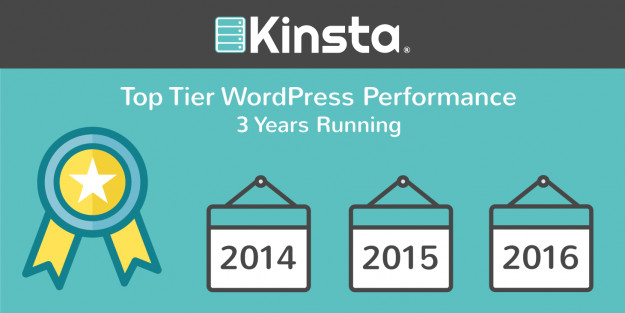