I wrote The Case for Regulatory Capture at ICANN last week and published it because I worried ICANN would approve the proposed .ORG contract at their ICANN65 Meeting in Marrakesh which started the same day I published the article. It wasn't passed during the meeting, but last night ICANN announced it signed a new agreement on the .ORG contract.

ICANN, which oversees the domain name system, was in talks with Public Interest Registry (PIR), a non profit owned by The Internet Society (ISOC), about renewing PIR's contract to manage the .ORG domain name registry. The majority of non profit's use the .ORG space to represent themselves online and PIR was given this monopoly by ICANN. PIR doesn't even manage the registry themselves, but outsources (via bid) to Afilias, a registry services provider. PIR's profits all directly go to ISOC. It's a monopoly designed to tax non profits for the benefit of ISOC. ICANN's proposed contract wanted to remove the provision that allowed PIR to increase their prices 10% per year and make it unlimited or uncapped, giving PIR the freedom to charge as much as they want. Non profits, charities, internet users as a whole were nearly universally against this change.

Back to ICANN's Mission

"ICANN's scope is to coordinate the development and implementation of policies: That are developed through a bottom-up consensus-based multistakeholder process and designed to ensure the stable and secure operation of the Internet's unique names systems."

Except, that's not what happened. Here's a timeline of what actually happened.

ICANN and PIR negotiated a contract behind closed doors and called for comments on a proposed renewal contract.

The public submitted its comments. 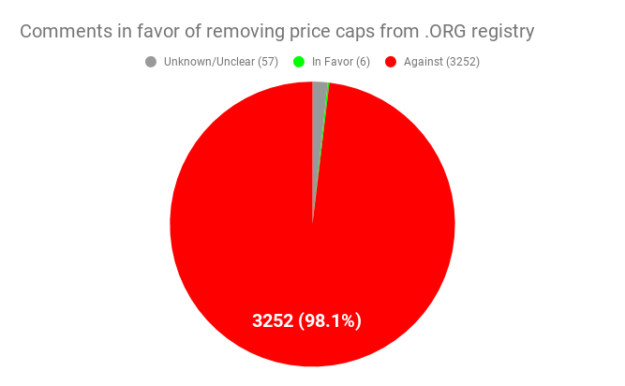 ICANN staff created a report summarizing the comments and said "ICANN org will consider the public comments received and, in consultation with the ICANN Board of Directors, make a decision regarding the proposed registry agreement."

ICANN approves proposed contract with no changes. Only a date was added, Cyrus Namazi got a promotion and someone spelled Jonathon's name wrong (compare).

The 96 page contract is identical from when it was proposed to signed. The multi stakeholders and bottom up process that is supposed to govern ICANN policy? Ignored.

The public outcry was nearly universally against this change. They weren't listened to at all.

Did ICANN's board vote on the proposed contract after being briefed about the public outcry? As of writing, I couldn't find any evidence in ICANN's board activity page. No agenda, no minutes, no resolutions, no briefing material, no preliminary report. Did ICANN staff simply push through this contract without a board vote? Either outcome is deeply disturbing and potentially violates the ICANN bylaws/mission.

ICANN as an organization has failed to live up to its mission. Greg Thomas wrote a response to my original article and while we may differ on some beliefs, his conclusion was,

"By all appearances, it hasn't taken long, in the absence of U.S. Government oversight, for rot to set in at the root. If the community is going to acquiesce to its own dismissal — if corruption is to become normalized at ICANN and in DNS governance — then, perhaps it's time to start looking towards the heavens."

It's hard to say ICANN doesn't appear to be a captured organization. It's abdicated its responsibility to govern, "ICANN must operate in a manner consistent with these Bylaws for the benefit of the Internet community as a whole."

Yesterday, ICANN failed the internet community as a whole. It sold them out and the best reassurance is 'trust us' from the organization they just gave the freedom to tax non profits using .ORG domains as much as they desire.

The foxes are watching the hen house now and ICANN willfully ignored the internet community and made this happen.