I've updated the site today to reflect that LiquidWeb and HostDime no longer provide shared hosting.

It leaves quite a large gap between SiteGround (72%) and pretty much everyone else still in the shared hosting space (<60%).

I do wonder if this is a bellwether for shared hosting becoming a thing of the past. There are still millions of people on it and in all likelihood will continue to be. But we've seen the rise of all sorts of specialty hosting which is likely eating up a lot of the market. The rise of developer oriented providers like Amazon, Azure, Digital Ocean have opened up the floodgates for building services on top of them. We've seen numerous companies built on top of these companies and targeting niches, especially WordPress like FlyWheel, Pagely. We've even seen configurable providers like CloudWays which lets you select the cloud provider of your choice and install and manage your websites on them.

These new hosting providers are charging more and giving different experiences to users. Developers have flocked to them and are building the next generation of web hosting services. High quality companies seem to be moving up market, charging more and providing more where I'm guessing the margins are substantially better than in the shared hosting space unless you're trying to upsell everything.

It will be interesting to to follow, will we continue to see more consolidation ala EIG and GoDaddy? Is there room for another great shared hosting provider that grows very large? Or will shared hosting slowly fade away as superior technologies (VPS) and specialized companies eat away at it providing the specific services people really want. We've also seen non-webhosts like SquareSpace, Wix and Weebly gain large market shares. On the BuiltWith estimates ranging from 880,000-1.6m websites for each of them.

The one trend I am not a fan of is that there are fewer and fewer really good choices in the shared hosting space that are of significant scale.

There are a handful of very good offers for students. The very best package for student developers is easily the GitHub Student Pack. It includes offers from Amazon, Digital Ocean and Microsoft Azure along with a number of other free tools and services.

There are also a handful of companies that offer discounts and credits for students which may be better suited for non developers. Some of them (e.g. BlueHost) offer cheaper pricing publicly than their student offering regularly during sales and promotions. The student deals may not be as good as they seem.

NameCheap for Education - Free .ME Domain for US, UK, CAN, AUS universities.

Amazon Launched Amazon Giveaway platform one week ago. I immediately thought it would be interesting to try out as a marketing channel. I've never done a giveaway. Although multiple hosting companies have offered to give free plans if I advertise their services; which didn't seem ethical given what we do.

Here's what I learned.

What to Give Away?

The first question is what product would correlate well with the service I'm offering (web hosting reviews). I looked at web hosting books and that was about the only thing related on web hosting on Amazon. But they looked terrible and I wouldn't want one, so why would my audience? So I had to get creative. I decided the easiest thing for me would be flash drives, a very common promotional item. Maybe I could spin a message about backing up your data (I honestly don't think the product selection and message was that good). I think the more tailored the giveaway is to your company the better. If you can giveaway your own product that would be the best.

Basically, you just browse around Amazon looking for a product that says

The second setting is whether it's free or you a visitor to follow you on Twitter. I think a Twitter follow should be the default setting. Otherwise you get nothing for your giveaway beyond people looking at the landing page. You have no idea who they are and have no means to contact them again otherwise.

Then you pay for the X items you are giving away (plus shipping).

The giveaway lasts for one week and you get a refund at the end of any unspent money.

How you market your giveaway probably has the biggest impact on how well it does. There's also probably a correlation with the quality of the giveaway and the targeting of it towards the audience you're after.

Our giveaway did the minimal marketing effort. It was posted on our Facebook page once. I also posted it on Twitter with the #AmazonGiveaway hashtag a few times. It was also posted to Reddit /r/AmazonGiveaways. I didn't use any targeted distribution for my audience, so it was the lowest common denominator of marketing.

However, I got really lucky and @Amazon retweeted me.

So lots of followers, but definitely no conversions. 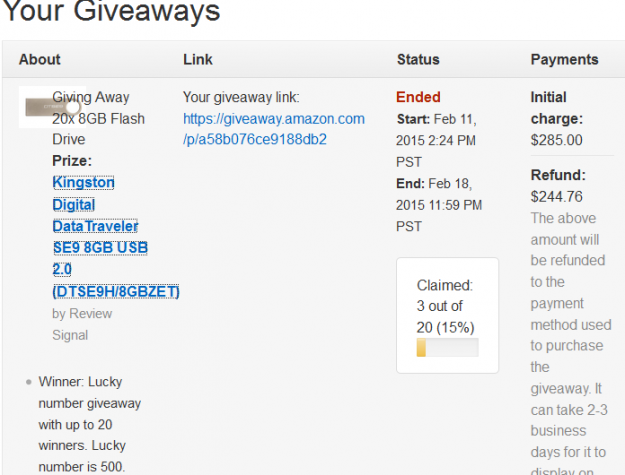 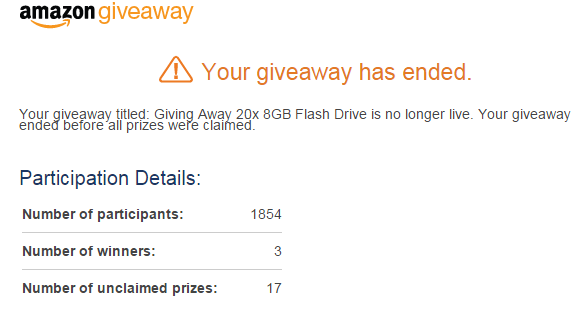 I was hoping to get in early on a new product and had to guess about a lot of things without anything to go on. Marketing basics still should apply if you're doing a giveaway. You need to market it towards your audience and giveaway something that they are most likely to care about. You also can't expect great results just by doing the bare minimum. I think I got lucky because Amazon retweeted me (which was one of the hopes of jumping in early, getting early press). But it's nothing to bank on.

If I were going to do it again, I would do it very differently. I wouldn't bother with #AmazonGiveaway hashtag and create a landing page specifically for the purpose. I would highlight what I am giving away and also highlight what Review Signal does. I would probably try to capture an email address before giving someone a link to the giveaway. It's more of a barrier, but also would hopefully filter people most interested in my giveaway (which hopefully would be very targeted towards my audience).

For the curious, some more analytics screenshots are below 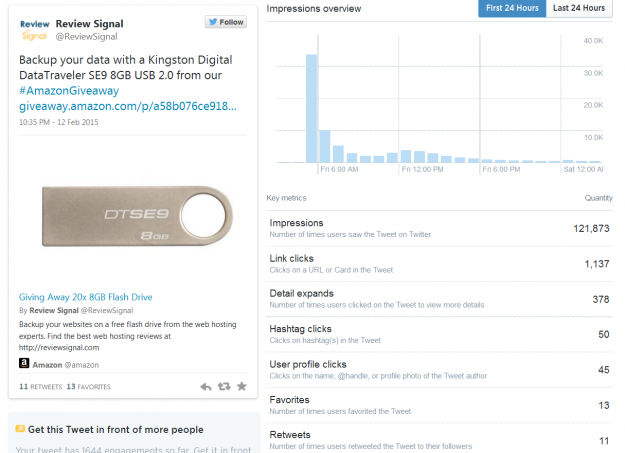 I am happy to announce we've added Windows Azure hosting platform to Review Signal today. Azure is definitely a big player in the cloud server market. It was also one a very notable absence in our listings. Now that we've added Azure and Amazon AWS in the past few months, our cloud listings for IaaS providers looks a lot more complete.

Windows Azure comes in with a 70% overall rating which is quite respectable and puts it right next to RackSpace on the rankings. Although the support scores seem to be a lot lower at an underwhelming 56%.

Want to see the full cloud provider rankings? Visit our complete rankings and click on the Cloud tab.

Today we've (finally!) added Amazon Web Services (AWS) to Review Signal.  AWS is one of the largest cloud hosting providers and power many other web hosting companies that are built on top of them (such as Heroku).

It took so long to add AWS because it's been very difficult to figure out what it is. AWS provides so many different products and tools that it's difficult to just call it a hosting company. They provide infrastructure for many of the core components of anything on the web - much of which is beyond what most people consider web hosting. They are an Infrastructure-as-a-Service (IaaS) provider that very few companies rival in terms of capability and scale (the only other one that jumps to mind is RackSpace).