I am speaking at HostCamp (side event to WordCamp Europe) in a couple weeks on the topic of Ethics in WordPress Hosting. I'm not really sure WordPress hosting has any specific differences from web hosting in general when talking about ethics. But ethical behavior in the web hosting space is something I talk about a lot. I also aggressively call out people/companies behaving unethically on this blog in the web hosting space. [1] [2] [3] [4]

As I was writing a response to a short interview to introduce the topic, I tried to think about a relevant example of why ethics matter in web hosting. A very recent event jumped to mind, someone tweeting that Digital Ocean [Reviews] shut down their company.

The stats are staggering:

That's only in the communities I participate in, I was sent the link by multiple people in other groups as well. I'm sure tens of thousands of people, if not more, read about this incident. 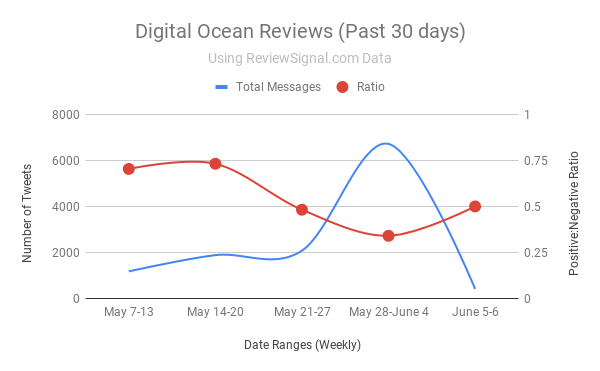 This is a view into what that tweet did to Digital Ocean's data here on Review Signal (I track Twitter data and sentiment about web hosting companies for the unfamiliar). I pulled the past 30 days of Digital Ocean information.

The tweet was sent on May 31, the 4th data point. We see an enormous jump in tweet volume. The preceding days had an average of 248 tweets per day. May 31 had 2000 and June 1 had 2489 tweets, nearly 10X the normal volume for two days. By June 4, we're down to 274 tweets, a normal volume. The internet outrage machine was out in force and spreading the word.

Digital Ocean responded on Twitter with Moisey Uretsky, a cofounder, intervening to escalate and resolve the issue. Digital Ocean also released a post-mortem on June 4 about what happened as promised (Nice to see a company keep their word and admit mistakes).

What does this have to do with Ethics?

Why did I even write this story and what does it have to do with ethics? The question I was trying to answer when I started thinking about this incident and digging into the data is "Why should hosting companies and those who do business with them care about ethics?"

A lot of developers and entrepreneurs read a story about a guy who was shutdown without warning, and then locked out seemingly permanently without being treated fairly. It strikes a chord with people when someone is being treated wrongly/badly with no explanation, especially when it's their livelihood that is impacted. It violates a fundamental moral code of fairness and trust.

The impact for a perceived ethical violation in this case was tens of thousands of people reading a negative story. It generated heated discussions and some very negative comments.

My data showed a tremendous increase in negative messages with the ratio dropping to 34% (Digital Ocean has historically over 70% positive messages).

They were quick to jump into some of the communities and address the issue. The post-mortem on Twitter received 225 Likes and 62 Retweets. That's 2.4% the amount of retweets and 4.9% the Likes. The impact of addressing the issue and trying to improve made a tiny fraction of the impact.

I will be clear here, I don't think Digital Ocean acted maliciously or unethically (intentionally). It sounds like a combination of automated system and a couple human mistakes lead to a very bad outcome for a customer that attracted a lot of attention. The way it was portrayed evoked feelings of an ethical violation of fairness and trust.

We wanted to share the specific details around this incident as accurately and quickly as possible to give the community insight into what happened and how we handled it. We recognize the impact this had on a customer, and how this represented a breach of trust for the community, and for that we are deeply sorry. We have a number of takeaways to improve the technical, process, and people missteps that led to this failure. The entire team at DigitalOcean values and remains committed to the global community of developers.

So when companies think about how they should behave, I want to use this example as an argument that people do care about companies behaving ethically and awareness of their behavior can quickly be amplified when a person's story resonates.