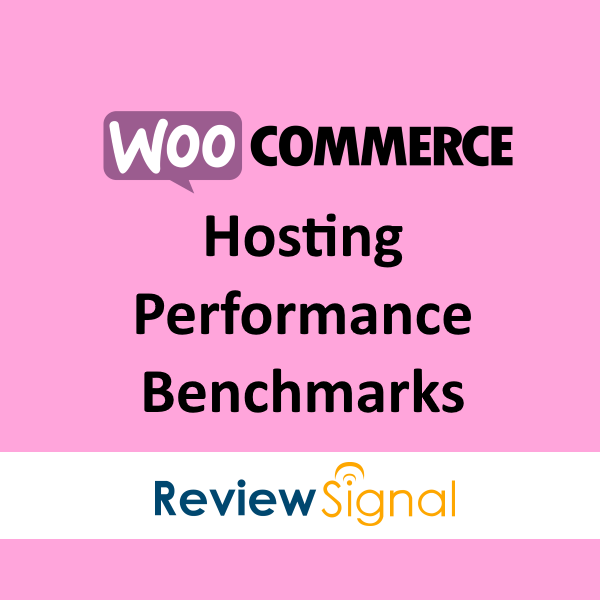 WooCommerce Hosting Performance Benchmarks is spawned off WordPress Hosting Performance Benchmarks and is designed to create a consistent set of benchmarks showing how WooCommerce specialized web hosting companies perform. The focus of these tests is performance, not support, not features, not any other dimension. These benchmarks should be looked at in combination with other sources of information when making any hosting decision. Review Signal's web hosting reviews has insights for some of the companies with regards to aspects beyond performance. That said, for the performance conscious, these benchmarks should be a good guide.

WooCommerce Hosting Performance Benchmarks are entirely opt-in, any company not listed chose not to participate or wasn't aware. You can ask any company to participate and hopefully consumer interest pushes them towards it. Web hosting companies can signup for our Web Hosting Company Mailing List to keep track of when signups are open.

Every plan was donated by the company for testing purposes with the strict stipulation that it would be the same as if any normal user signed up. There is a notes section that details the minutiae of changes made to plans at the end of this post. Nearly every single company had security issues that I had to get around, so they worked to make sure my testing went through properly. Load testing often looks like an attack and it's the only way I can do these tests.

The only price tier that had enough interest to test was the <$100/month group. 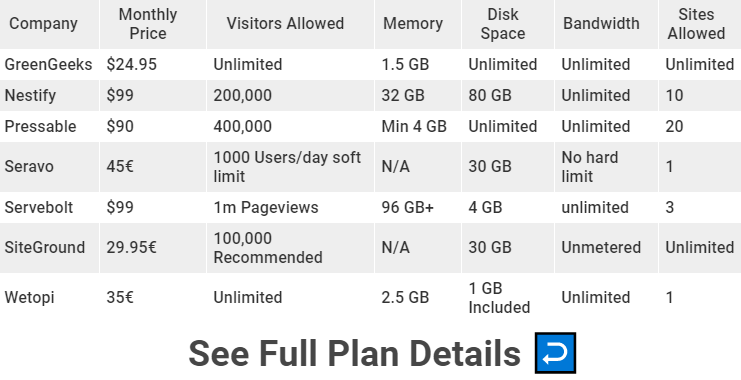 The goal of this research is testing the performance of specialized WooCommerce hosting.  The two measures to determine performance are peak performance and consistency. Peak performance is measured using load testing services which emulate large numbers of users visiting a website and watching how well the hosting responds under these stressful conditions. Consistency is measured using uptime monitoring to make sure that the servers remain available for a longer duration of time.The methodology is similar to WordPress Hosting Performance Benchmarks. However, the difference is the Load Storm test which was designed to test cached used performance has been modified to test WooCommerce specific paths and emulate an ecommerce traffic profile.

There are some non-impacting measurements taken as well that are recorded to help inform more advanced users and potentially be used to create a benchmark at a later time. Geographic response times from multiple (12) locations using WebPageTest. The WPPerformanceTester performs PHP Benchmarks and WP benchmarks to see how fast the underlying server performs for different kinds of operations. SSL test was added to all price tiers this year. These measures don’t impact the Top-Tier WordPress Hosting status we give, nor the Honorable Mention status.

These tests are expensive to run and I refused to accept any hosting sponsorships. There is a participation fee involved to cover the costs. Every company paid the same amount to participate: $250.

No company needed any additional testing and no additional fees were collected.

Many companies had caching turned on from either a click, welcome email instructions or other obvious way that was presented clearly to new users. Some of the instructions might be inside wp-admin, others had features in the control panel to turn on caching/performance optimizing. If it wasn't made explicitly obvious it did not count as default.

All tests were performed on an identical WooCommerce dummy website with the same plugins except in cases where hosts added extra plugins or code. The Storefront theme was used with the following sample products. The following Plugins were installed: Jetpack, WooCommerce, WooCommerce Admin, WooCommerce Services, WooCommerce Stripe Gateway, and WP Performance Tester.

The process for LoadStorm was the unique WooCommerce specific test. There were four different profiles created and given their own user distributions (in % after profile), all with 5-10 second page think time. The test scaled from 10 to 1000 concurrent users over 40 minutes and stayed at 1,000 concurrent users for 20 minutes (60 minute test, 20 minute peak). 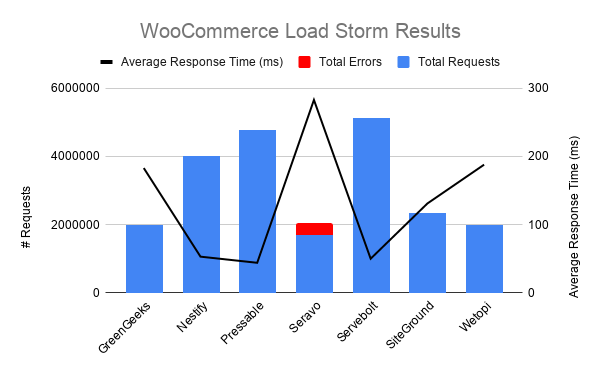 Seravo had similar issue in their other load tests in the WordPress Hosting Performance Benchmarks in the $101-200 tier which was a docker proxy bug that couldn't be resolved during the tests.

I decided to take a deeper look at the results and analyze the performance of loading HTML mime types, to ignore a lot of static assets which are cached and bring down average response times.

I broke it down by profile because each script is different in terms of which endpoints on WooCommerce they are hitting. 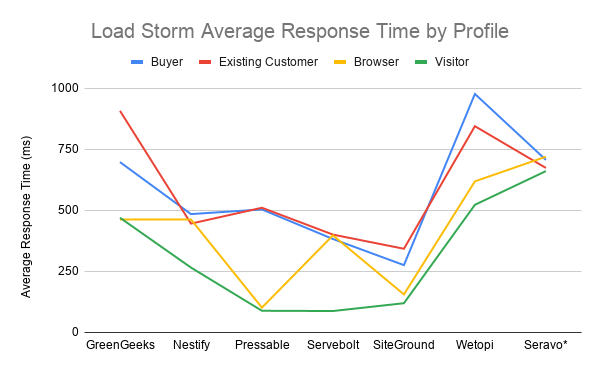 What we can see from the results is that the homepage only (Visitor profile) is universally the fastest page for every company. That would be expected since the page should be cached and it's only hitting that single endpoint.

The second fastest profile in general seems to be the be the product viewer (Browser profile) who simply looks at different products on the site.

The Buyer and Existing Customer profiles appear to be the heaviest - although it's unclear one is obviously more stressful for WooCommerce based on the results. Both are having to deal with data being sent to the server and handled in a unique manner for each request.

It is reassuring to see that the generally expected outcome matches the reality. It's also nice to see the average response time under 1000ms for even the heavier pages.

LoadImpact ran a simple Lua script that requested the frontpage of the test site. It scaled from 1 to 2,000 users. It was designed to emulate the old Blitz.io test of simply hammering the cache. Source code. 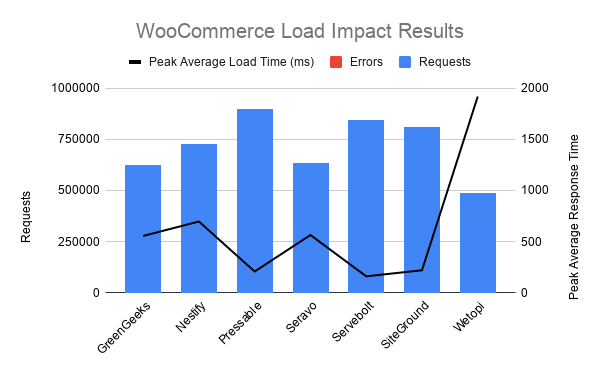 Wetopi struggled a some and peak average load time was up to 1920ms.

Uptime was monitored for at least three months for the homepage of the site. UptimeRobot and StatusCake were used to monitor uptime at 1 minute and 5 minute intervals respectively. A self-hosted an uptime monitor as a third (backup) to compare against, if discrepancies existed between UptimeRobot and StatusCake, using PHP Server Monitor was also running (Custom Uptime). 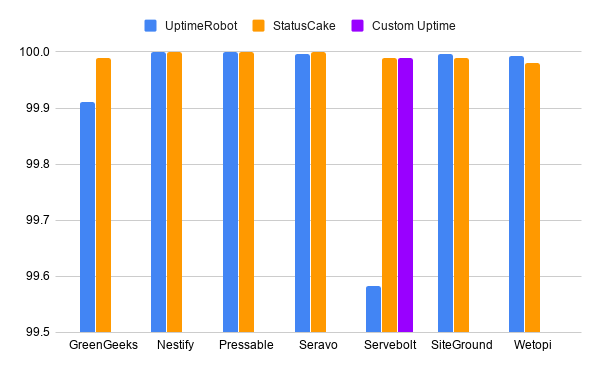 Every company was above the 99.9% threshold I would expect from any company. The only issue was a strange discrepancy between UptimeRobot and StatusCake on Servebolt's uptime. One showed a very low 99.583 and the other 99.99. The third monitor I setup showed 99.99%, so the issue appears to be with Uptime Robot. 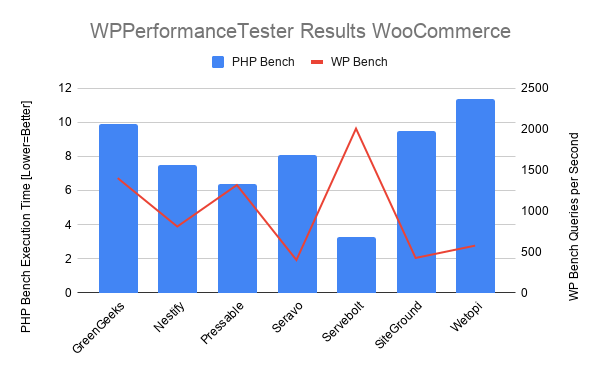 Servebolt was the obvious standout here. They had the highest queries per second and lowest PHP Bench time.

The tool is available at https://www.ssllabs.com/ssltest/. Every single B grade this year was for the following reason according to Qualsys: "This server supports TLS 1.0 and TLS 1.1. Grade capped to B."

Green Geeks was the only company to receive an A+ rating.

There are two levels of recognition awarded to companies that participate in the tests. There is no ‘best’ declared, it’s simply tiered, it’s hard to come up with an objective ranking system because of the complex nature of hosting. These tests also don’t take into account outside factors such as reviews, support, and features. It is simply testing performance as described in the methodology. 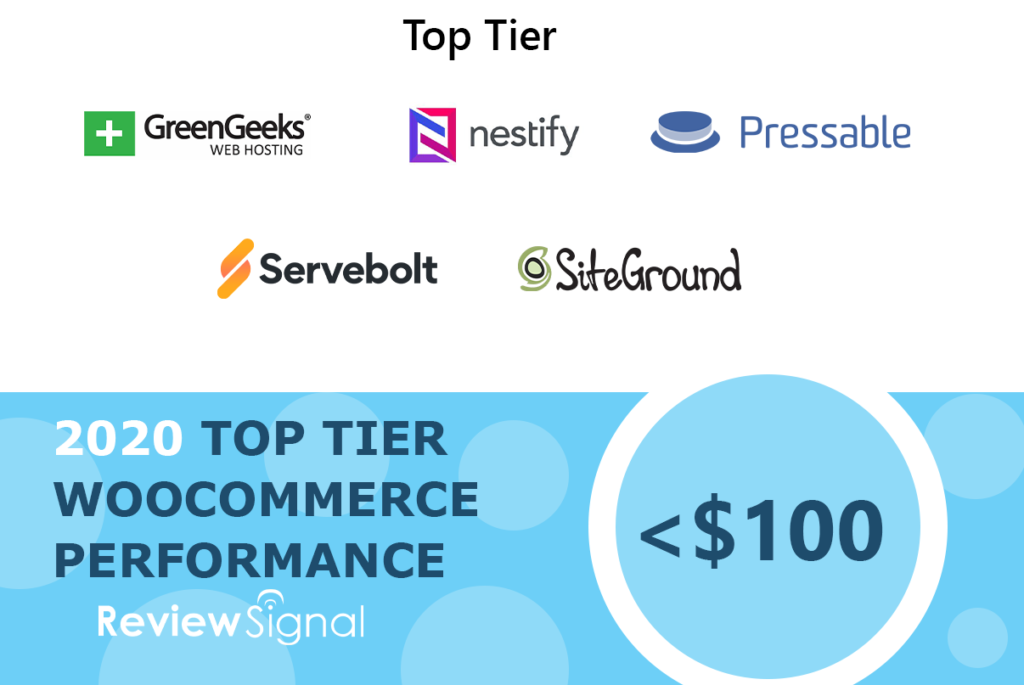 No Honorable Mentions were earned this year.

Green Geeks did well on every test. It didn't stand out in any of them as the fastest but it handled every test without failures and kept response times from increasing. It was also on the cheapest package competing. Well done and congratulations to Green Geeks for earning Top Tier honors.

Nestify had only three errors total in both load tests which is excellent. The average response time on Load Storm was a very fast 53ms. Capped off with perfect 100% uptime on both monitors was an excellent performance overall for Nestify. I'd like to see WebPageTest scores get faster but that's a minor complaint. It was a Top Tier performance and Nestify deserves the recognition.

Near perfect uptime with 100% and 99.97% was a solid start. The Load Impact test went smoothly with zero errors. However, an unfortunate docker proxy bug that couldn't be fixed caused a high number of errors on Load Storm knocking it out of any recognition. A solid start, hopefully next year the kinks will be worked out and we will see them do better.

Servebolt had the fastest WebPageTest average, fastest PHP Bench, highest WP Bench and fastest Peak Average Load Time on Load Impact. Throw in second fastest average response on Load Storm. Then on the broken down by script measuring time for key pages to load, they were the second fastest on both Buyer and Existing Customer profiles, third on Browser profile and first on the Visitor profile. Servebolt had an awful lot of fast across all the tests, a very well earned Top Tier performance.

SiteGround had solid uptime with 99.99% and 99.996%. It had the third fastest Load Impact Peak Average Load Time. It was also the fastest on the Buyer and Existing Customer profiles along with second and third on Browser and Visitor profiles respectively. SiteGround earned Top Tier recognition for its great performance.

A solid uptime was recorded at 99.993% and 99.98%. WebPageTest had Wetopi earning the fastest and slowest in some locations. Interesting pattern on the radar chart. Load Storm Wetopi held up but it was on the slower end in most measures compared to its competitors. Unfortunately, the problem was Load Impact which caused load times to peak at almost 2 seconds. It was a decent performance but there's still improvements to be made.