WordPress Hosting Performance Benchmarks is designed to create a consistent set of benchmarks showing which web hosting companies offer best in class performance. The focus of these tests is performance, not support, not features, not any other dimension. I've been testing performance for seven years now and have done some historical analysis including Does Price = Better Performance in WordPress hosting? The short answer is, generally yes, and over the years WordPress hosting has become faster. I'd like to think these benchmarks play a small role in pushing companies to perform better. These benchmarks should be looked at in combination with other sources of information when making any hosting decision. Review Signal's web hosting reviews has insights for some of the companies with regards to aspects beyond performance. That said, for the performance conscious, these benchmarks should be a good guide.

These benchmarks have now moved to WPHostingBenchmarks.com.

Some companies dropped out this year, but overall we added net three more companies to the 2020 tests (29 companies with 31 brands).

For an old full visualization of companies that have participated in previous years and their performance please see this table. (Updated 2018 data)

Why are some companies missing? If they aren't listed, they didn't opt in to participate. Chances are if it's a well known company they declined to participate, if it's a smaller one, they may not have known about this test and I may not have been aware of them to reach out. You can ask any company to participate and hopefully consumer interest pushes them towards it. Web hosting companies can signup for our Web Hosting Company Mailing List to keep track.

Below you will see the price brackets and which companies participated. Specific details will be included on each bracket's write up. 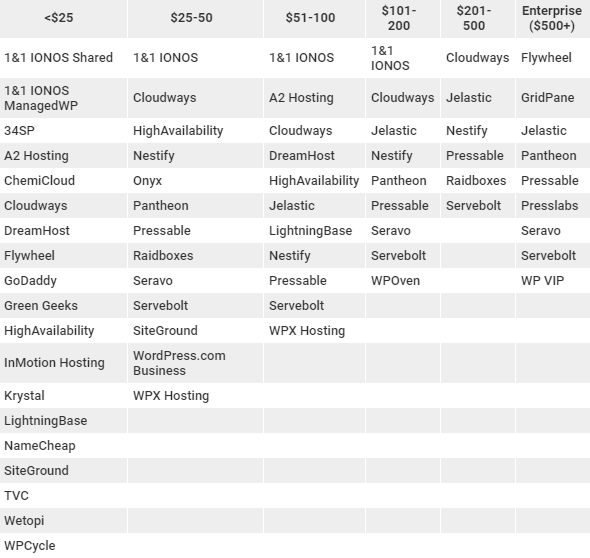 There are some non-impacting measurements taken as well that are recorded to help inform more advanced users and potentially be used to create a benchmark at a later time. Geographic response times from multiple (12) locations using WebPageTest. The WPPerformanceTester performs PHP Benchmarks and WP benchmarks to see how fast the underlying server performs for different kinds of operations. SSL test was added to all price tiers this year. These measures don’t impact the Top-Tier WordPress Hosting status we give, nor the Honorable Mention status.

All testing was done on WordPress 5 with Classic Editor.

Full Dummy site (downloaded) with instructions is available at http://wordpresshostingbenchmarks.reviewsignal.com/.

All tests were performed on an identical WordPress dummy website with the same plugins except in cases where hosts added extra plugins or code.

The process for LoadStorm will be a scaling user test based on the pricing tier. The simulated users will hit the homepage, hit the login page, login, hit a few pages and posts. The test duration was 30 minutes and scaled from 500 to start to n,000 users over 20 minutes and sustained peak load for 10 minutes.

LoadImpact ran a simple Lua script that requested the frontpage of the test site. It scaled from 1 to n,000 users based on the price tier over a 15 minute duration. It was designed to emulate the old Blitz.io test of simply hammering the cache.

Uptime was monitored for at least three months for the homepage of the site. UptimeRobot and StatusCake were used to monitor uptime at 1 minute and 5 minute intervals respectively.

The tool is available at https://www.ssllabs.com/ssltest/. Every single B grade this year was for the following reason according to Qualsys: "This server supports TLS 1.0 and TLS 1.1. Grade capped to B."

There are two levels of recognition awarded to companies that participate in the tests. There is no ‘best’ declared, it’s simply tiered, it’s hard to come up with an objective ranking system because of the complex nature of hosting. These tests also don’t take into account outside factors such as reviews, support, and features. It is simply testing performance as described in the methodology.

These tests are expensive to run and I refused to accept any hosting sponsorships. There is a participation fee involved to cover the costs. Every company pays the same amount based on the price tier of the product entered into the testing.

All fees paid will be documented publicly for posterity.

All companies paid the same fee based on the pricing tier they competed in. The following companies were re-tested and the number of tests and associated fees are documented below.

Many companies had caching turned on from either a click, welcome email instructions or other obvious way that was presented clearly to new users. Some of the instructions might be inside wp-admin, others had features in the control panel to turn on caching/performance optimizing. If it wasn't made explicitly obvious it did not count as default.

I almost didn't let Jelastic participate because their billing model makes it difficult to do apples-to-apples comparisons. However, they came up with predefined packages which fit the price tiers in this testing. All Jelastic tests were done with their partner, Scaleforce. They also provided the following statement:

"Jelastic is offered across a distributed network of hosting partners worldwide (https://jelastic.cloud/), thus the infrastructure performance and price for resources vary based on the chosen service provider. WordPress can be installed as packages with fixed price or using dynamic resource allocation with Jelastic standard pay-per-use approach (https://jelastic.com/pay-as-you-use-cloud-pricing/)."