I'm pleased to announce in our effort to maintain the best web hosting reviews, we've added yet another company to our database here at Review Signal. Introducing Arvixe Web Hosting Reviews. They are one of the few companies we track that offers Windows web hosting. They also offer nearly every type of hosting: Shared, Reseller, VPS, Cloud, and Dedicated.

Arvixe was purchased by Endurance International Group in October 2014. EIG is the parent company of many brands listed on Review Signal: A Small Orange, BlueHost, HostGator, HostMonster, iPage, JustHost, and NetFirms. EIG brands span the gamut in terms of ratings at Review Signal. A Small Orange is one of the top rated companies we track. Unfortunately, Arvixe joins the majority of the EIG brands on the lower half of our ratings.

See Arvixe's Overall Rating over the past year below:

If you are following the tech or web hosting world at all today, you've probably heard about GoDaddy [reviews] buying Media Temple [reviews] which Tech Crunch announced earlier today. The news is evoking some very strong emotions and reactions from the community.

@iamelliot Because MediaTemple are absolutely definitely going to start powering their servers by burning elephant tusks.

But emotions are only so interesting. Let's talk about the implications of this acquisition and how people might actually be affected by it.

The obvious winners here are the owners of Media Temple: Damian Sellfors and John Carey.

One of the biggest concerns that I've seen is that Media Temple will now go downhill. I don't know that this is guaranteed and it seems unlikely to happen overnight. I only have a few years of data, and only one company jumps to mind as a good comparison: A Small Orange [reviews].

A Small Orange were acquired by Endurance International Group (EIG) in March 2013. EIG, for those who don't know is the conglomerate that owns many major web hosting brands including BlueHost [reviews], HostGator [reviews], Host Monster [reviews] and more.

Most of the EIG brands do not have a great reputation. A Small Orange has had one of the best reputations since Review Signal has launched. So, I've been keeping a close eye to see what happens to their ratings as time goes on. They've continued to operate independently and their ratings have gone up in the past few months. That is the exact opposite of what many people would expect based on the acquisition.

I only have 6 months of data to look at so far, but the trends looks good for them. There may be a decline at some point, but the idea that a company that gets acquired immediately becomes bad isn't necessarily true. Which is good news for Media Temple customers.

When the second question in your acquisition FAQ is "What about GoDaddy’s reputation in the tech community?" you have a problem.

The answer sends some confusing messages too:

GoDaddy has been transformed in recent months and is essentially a new company. If we did not like what we have seen, we would not have joined the GoDaddy family. They have overhauled their leadership team and attracted tech talent from the best-of-the-best. We love “the new GoDaddy” that CEO Blake Irving and his team have created, especially their new approach with advertising, product focus and UX.

Though neither GoDaddy’s brand nor operations are being integrated into ours, we are excited to be a positive influence on them with how to make even more improvements to better serve the Web pro community.

It's a new company, they are great, but we won't be integrating any of that greatness. In fact, they turn around and say they hope to influence GoDaddy positively, so Media Temple is better? All the data we have would agree with that argument.

As far as GoDaddy being a new and great company?

Not seeing it. It looks fairly stable at a mediocre level. Maybe more time will change that.

Another bad signal is both co-founders are leaving. They are also buying back Virb. There are a lot of flowery words about growth, dreams and better serving customers, but the actions seem to speak louder.

The web hosting industry continues to see consolidation. There appears to be two major players for the consumer market now: GoDaddy and Endurance International Group. They both seem willing to spend massive amounts of money to buy valuable brands.

Last year Media Temple had $52 million dollars in revenue [source]. So I would expect they sold out for 100's of millions considering growth, the cost of customer acquisition in the web hosting industry and low attrition rates.

Neither seems to be aggressively pursuing the growing developer market. There is a whole different set of competitors in the space like Amazon, RackSpace, Linode and Digital Ocean. Media Temple says they specialize in serving web professionals, but that's a slightly ambiguous term. This may be a slight push in the developer direction for GoDaddy, but I am not sure that the GoDaddy brand has much of a chance at making a headway in the developer space. It seems to evoke a lot of strong emotions (both rational and irrational). Using the Media Temple brand may be their only chance at getting any type of foothold.

I don't expect any dramatic changes right away. Media Temple should be on their absolute best behavior considering they know how bad the GoDaddy brand is and any legitimate reason to sow doubt would be amplified by the acquisition news.

A lot of people want to move on moral principles and that's reasonable. I would suggest taking a look at our web hosting reviews.

For those on the fence, locked-in or unable to afford a move, I wouldn't worry too much. We have yet to see any change in performance, it's likely to remain stable for a while.

Keeping an eye out for warning signs of declining performance at your web hosting company is always a good idea. This applies to any company, because over time, service and quality will vary at any company.

I didn't quite finish porting the D3 / Rickshaw version of this to WordPress, so that users can explore the data themselves. So that will probably be next Staturday. However, I wanted to share a preview visualizing how the rankings at Review Signal have changed over time.

A few interesting points are this month, August 2013, you can see the four major EIG brands we track drop (BlueHost, HostGator, HostMonster, JustHost). We see WPEngine come down to mortal levels. We see the rise of DigitalOcean. I will do a more thorough investigation when the interactive chart gets published. 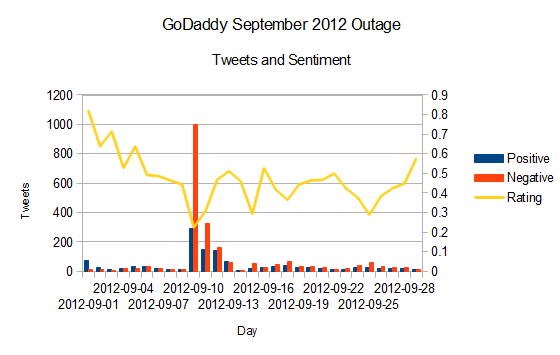 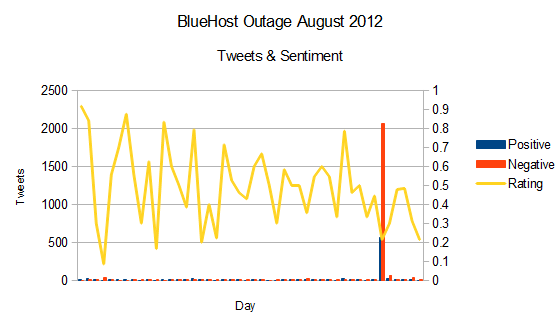 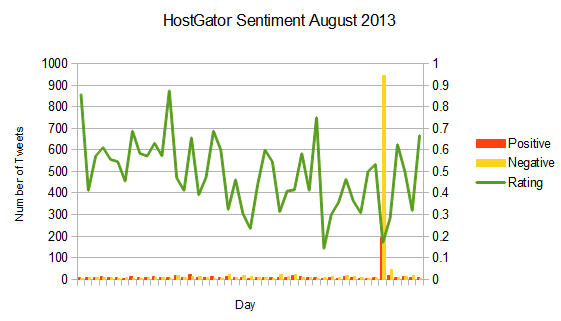