I'm not shocked at all to see BlueHost somehow still manages to be at the very top (albeit the list is alphabetical). They've continuously survived being listed, I guess that's what a million dollars will do.

Where is the transparency?

They requested hosts submit a ridiculous amount of personal information. You can see the full survey below: 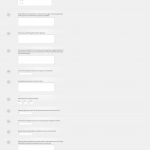 Mind you, as far as anyone can tell, Matt has complete control over who shows up, and Automattic bought the majority stake in a company competing in the WordPress hosting space, Pressable. They also run WordPress.com VIP. They are also an investor in WPEngine. So some of the most secretive numbers a company competing in this space might have are being disclosed potentially to multiple of their biggest competitors through a process with no transparency or even a person named to be responsible for it.

That alone is worrisome for the process, it should definitely be run independent of Matt.

Everything else needs to be explained too. Who is responsible for this revamp? What were the selection criteria? How often will it be updated? Will existing companies be continuously re-evaluated? 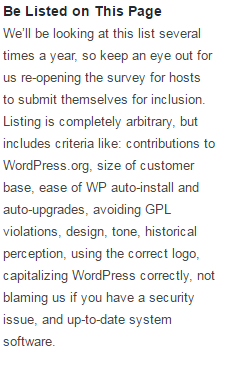 It's not clear who 'we' is. They say listing is arbitrary but then add criteria. I'm not sure they understanding what arbitrary means. Or maybe they simply ignore the criteria they mention. Maybe it's just a terrible joke? Just like the process (or lack thereof) that seems to be in place.

A lot of it is pretty subjective. design, tone, ease of WP auto-install, historical perception? BlueHost is still listed, which is has consistently been pretty poorly reviewed (along with just about all EIG brands) and continues a downward trend.

Furthermore, it's the same criteria that's been written since at least 2010.

So maybe saying it's arbitrary gives them as escape to list whomever they want, especially considering the financial considerations involved.

I tried to find some explanation for how the three new companies were selected, but there really isn't much to go on. DreamHost is a Silver Community Sponsor for WordCamp, but so is GoDaddy who did not make the cut.

FlyWheel only does WordPress, but DreamHost and SiteGround do a lot more.

DreamHost has a ton of forum threads on WordPress.org, SiteGround has only a few over 10 years. FlyWheel has one total.

I talked to someone at one of the newly listed hosted companies and they confirmed that the form was filled out and that was it. Also, there was no financial consideration involved with the listing.

Which is very nice to hear, but doesn't really inspire confidence in the recommendations.

But what about the new companies and their ratings?

DreamHost has a 59% rating on Review Signal, which is ok, given the upper end of the shared hosting spectrum is SiteGround at 71%. FlyWheel, the specialized hosting company has the highest rating of any company at a whopping 85%.

So the new companies are all far better than BlueHost (41%). But there are other very highly rated companies that didn't make the cut. For example, WP Engine (72%) is probably the biggest  name not listed based on size, brand in the WP community and rating at Review Signal.

I'm glad there are some much better companies than Blue Host listed and at least one of them got there without paying for the privilege. There is still language about some donating a portion of the fee back, which makes you think it's still at least BlueHost.

I'm still unhappy with the lack of transparency of the entire process. The most influential place for people entering the WordPress community is recommending one very mediocre hosting company who has historically paid large sums to be listed and has a deep financial relationship with the person ultimately responsible for the recommendations. The revamp didn't change that.

I am disappointed and I don't expect to hear anything from WordPress.org/Matt clarifying the hosting page, again.

There was a little discussion in the WordPress slack. macmanx is James Huff, an Automattic employee. Seems they wanted only 1 managed WordPress host. Other details include around 100 applications. And even in the WordPress slack, the first comment doubts that these are really the best (well, one which almost everyone assumes to be BlueHost). 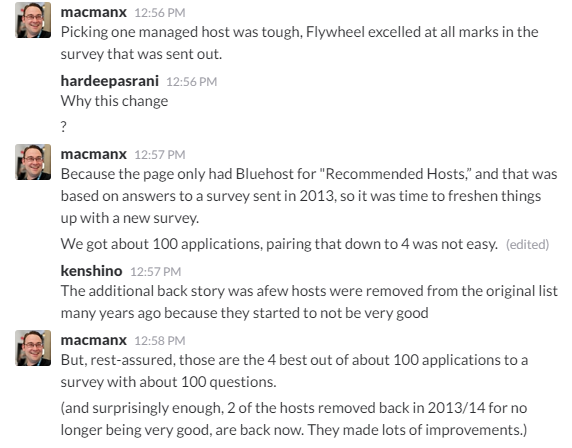