Presslabs participated for the fourth time in our WordPress Hosting Performance Benchmarks (2018). This review is based off the results of that test. Presslabs entered a plan into the Enterprise category, one level up from last year's $201-500 range. Last year Presslabs earned an honorable mention in the $201-500 price tier.

The Load Storm test is designed to simulate real users coming to the site, logging in and browsing the site bursting some of the caching mechanisms typically found on managed WordPress hosts.

An excellent performance on Load Storm from Presslabs. No signs of load and minimal errors.

The Load Impact test makes sure static caching is effective so that if a page gets a lot of traffic the site will keep responding without issue.

The WPPerformanceTester results had the fastest PHP Bench and second fastest WP Bench.

Presslabs stepped up a price tier and improved from honorable mention last year to earning Top Tier WordPress Hosting Performance award in 2018 at the Enterprise tier. It's nice to see another worthy competitor in the Enterprise space that can handle large sites. 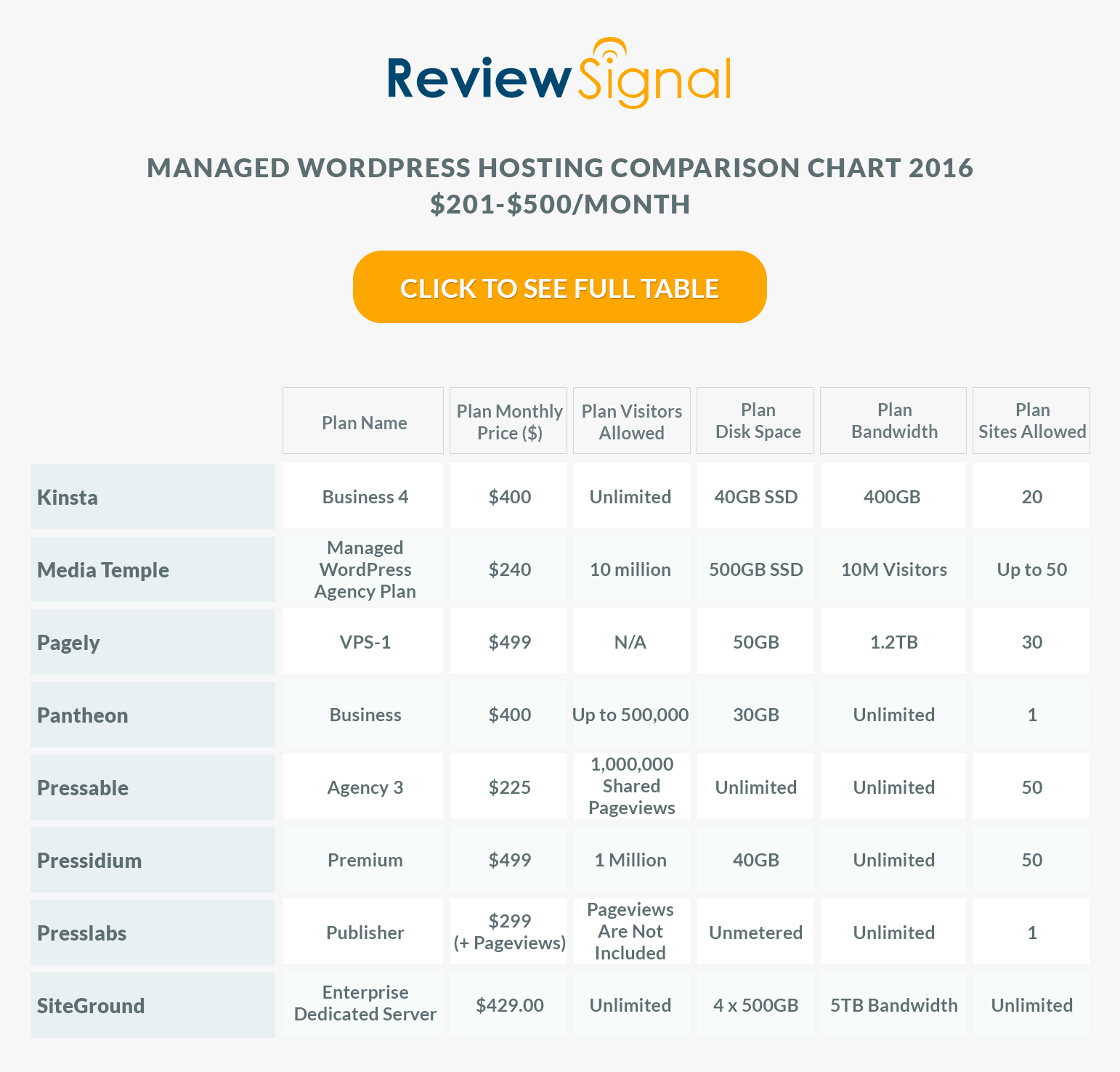 Kinsta and Pressidium were clearly the two best performers in this test.

Pressable had some minor issues that looked like they may have been security related to wp-login.

MediaTemple [Reviews] had a spike of errors at the very end and some minor errors throughout the test that might have been security related since they didn't impact response times at all.

PressLabs had some spikes and wp-login related problems but the server started to slow down its response times as the test progressed.

Pantheon [Reviews] had similar issues to PressLabs with slowing down and the largest chunk being wp-login related.

SiteGround [Reviews] started to have trouble around 12 minutes in and saw spikes, also mostly related to wp-login/admin. They also had increased and unstable response times associated with the spikes.

Pagely [Reviews] struggled the most with this test with spikes and increased response times. wp-login again was the worst offender.

What is amazing is none of these companies completely failed with 5000 real users logging in and bursting caches.

Kinsta, Pantheon, Pressable, Pressidium, PressLabs, and SiteGround [Reviews] all had close to no errors (and exactly none in PressLabs's case).

Pagely [Reviews] had a couple spikes which increased response times and errors.

MediaTemple [Reviews] had an early spike and a big spike later. The big spike later looks like it may have partially been a security measure. But it did eventually increase response times as well.

I hate having to penalize a company for uptime, but Pressable recorded 99.88 and 99.90 uptime scores which is below the 99.9% I expect from every company.

Every other company did well.

Fast. Not much to really say about these results. Nobody had issues, nothing was particularly interesting here other than nobody can get into China at any price level.

Not sure why SiteGround's PHP bench was so slow. The average WP Bench scores are also lower than every previous tier with PressLabs leading the way at 841. These more expensive solutions are generally trending towards cloud/clustered solutions which have slower database throughput in exchange for scale.

The high end WordPress hosting market is growing and has a lot of good options. No company in this tier completely faltered during the load tests despite a huge strain being put on them  of 3000 concurrent hits to the frontpage and 5000 logged in users browsing the site. 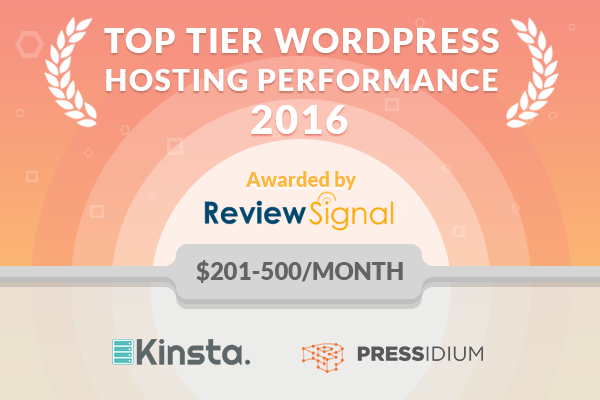 Kinsta and Pressidium clearly led the pack in terms of performance. They were the only two companies that handled LoadStorm without issue. They also didn't have any other issues across the other tests.

PressLabs earned itself an honorable mention. It had some issues with the LoadStorm test but it managed to stay up and did well on all the other tests.

Overall, a splendid performance that earned them top tier WordPress hosting in the $201-500/month range. No faults in their performance at any point.

It's nice to see Media Temple playing with the big boys and doing a respectable job. They had a little bit of trouble with the LoadStorm test and some possibly security related issues during the Blitz test which kept them out. But they weren't out of place in this bracket and were by far the cheapest at $240/month.

Pagely had some minor problems with the Blitz test but the LoadStorm test really seemed to be the big problem. The 5000 users seemed to clearly tax the server too much. Pagely reviewed the results and issued a full explanation. Their tl;dr was "Wrong plan/instance size for this test.
We price the value of our human Support and DevOps resources into the plan cost, which puts the ideal Pagely plan for this test outside the $500 cap. If the customer does not utilize the full range of services we provide they are essentially overpaying for AWS instances that in this case were undersized and not tuned for the test. "

Pantheon did well everywhere but LoadStorm which was a common theme for this bracket. They didn't fail, but they certainly were being taxed with increased load times and error rates.

Pressable could have earned an honorable mention if it wasn't for some uptime issues. They found themselves just below my 99.% expectation. They handled Blitz without issue and LoadStorm looked pretty good except wp-login had some what I imagine was security related issues.

I'm running out of positive adjectives to say how well Pressidium has done this year. A perfect LoadStorm test with zero errors, the lowest peak response time and lowest average response time. Followed up by a near perfect Blitz test. Top tier for sure.

PressLabs was the only company to earn an honorable mention. They had a bit of issues in the LoadStorm related to wp-login of course, but other than that put on an excellent performance.

In an odd twist of fate, I accidentally ran the same Blitz test on their lower priced cloud platform and it did better than the dedicated server. The shared infrastructure can often have far more powerful hardware backing it than dedicated machines and that's one of the interesting results. For large bursts, it may work better. Overall, this plan did pretty well, but LoadStorm clearly overloaded the server a bit too much to earn any special recognition.

This is the fourth round of managed WordPress web hosting performance testing. You can see the original, 2014 version , and 2015 version.

Go Directly to the Results

Companies that didn't participate this round but did on previous rounds: WebHostingBuzz, WPPronto, Nexcess, A Small Orange [Reviews] and  WebSynthesis [Reviews].

This year is a bit different than years past where every company and plan competed against one another. When I started the price gap was from $5/month to $29/month. Last year the gap was $5.95 to $299. I was only testing entry level plans but the market has dramatically changed since I first got started. Today, there is demand at many different price points and lots of companies have gone upscale with WordPress.com VIP at the top of the price bracket starting at $5,000/month. The only logical way to break things up was by price brackets. So below you will see the brackets and which companies participated. Specific details will be included on each bracket's write up.

The question I tried to answer is how well do these WordPress hosting services perform? I tested each company on two distinct measures of performance: peak performance and consistency. I've also included a compute and database benchmark based on a WordPress plugin.

All tests were performed on an identical WordPress dummy website with the same plugins except in cases where hosts added extra plugins. Each site was monitored for approximately two months for consistency.

LoadStorm was kind enough to give me resources to perform load testing on their platform and multiple staff members were involved in designing and testing these WordPress hosts. I created identical scripts for each host to load a site, login to the site and browse the site. Logged in users were designed to break some of the caching and better simulate real user load. The amount of users varies by cost.

I used Blitz again to compare against previous results. This tests the static caching of the homepage. I increased the number of users based on monthly cost this time.

Consistency matters. I wanted to see how well these companies performed over a longer period of time. I used two separate uptime monitoring services over the course of a month to test consistency.

A2 - VPS Servers can't install WordPress out of the box without extra payment for Softaculous. Disabled recaptcha.