This post focuses only on the results of the testing in the Enterprise ($500+) price bracket for WordPress Hosting. 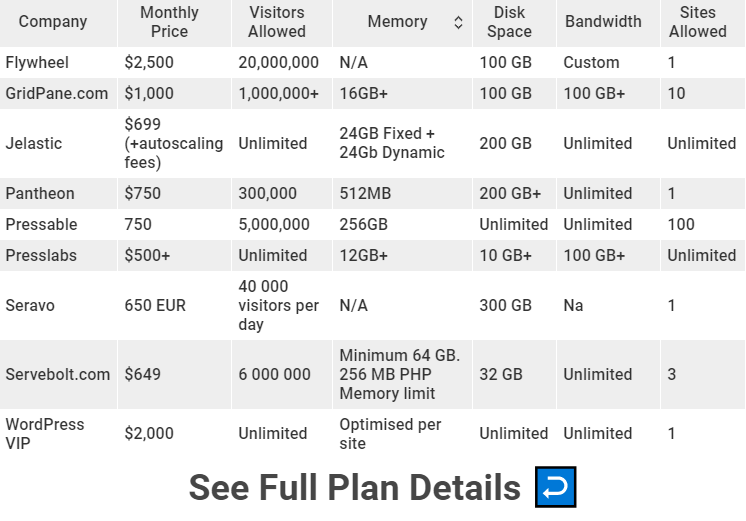 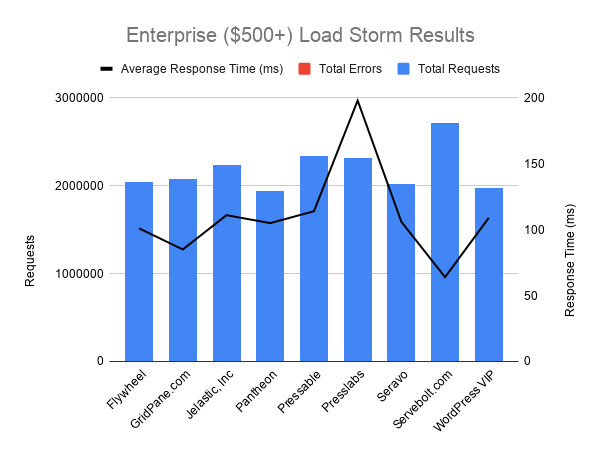 Flywheel [Reviews], GridPane, Jelastic, Pantheon [Reviews], Pressable, Presslabs, Seravo, Servebolt and WPVIP all handled this test without issue. It's impressive how the average response time for every company was below 200ms. 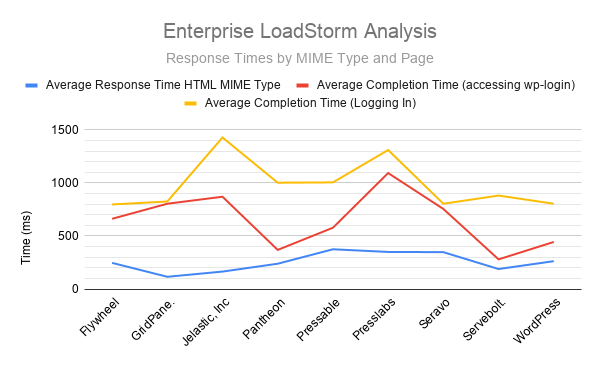 I thought it would be interesting to take a deeper look into the results since every company handled it pretty easily. I broke down three different views:

The HTML MIME type should reduce the effect of caching on response times because it's only pages being served, not things like css/js/etc. Page 2/3 are the heaviest queries accessing the WordPress backend and passing data to it which cannot be cached because users need to login and get their data.

The results were quite interesting to see, the response times are a lot higher on the harder tasks, as expected. I wasn't sure how much higher they would be but it's substantial. 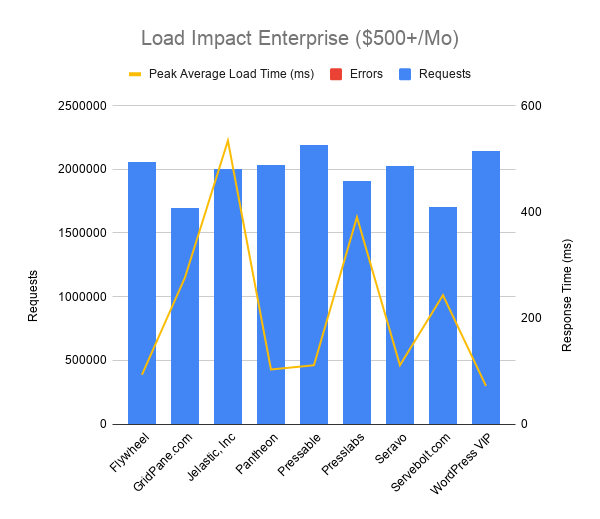 No company struggled with the Load Impact test. Jelastic had a very strange looking graph with response times bouncing up and down, possibly an auto scaling issue? GridPane's graph looked like there was an increasing in load but the peak was under 300ms, it really isn't an issue. 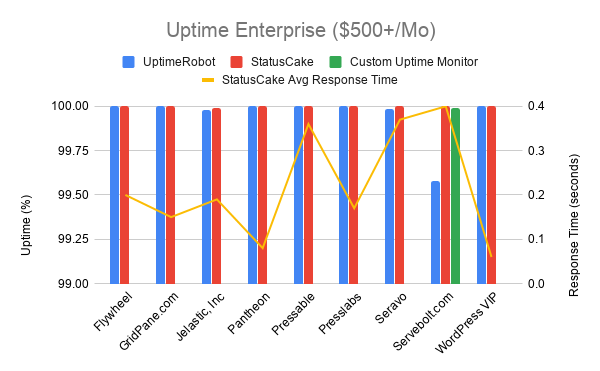 No companies had any uptime issues.

Servebolt also had a discrepancy between UptimeRobot and StatusCake uptime. One showed a very low 99.581 and the other 100. The third monitor I setup showed 99.99%, so I went with the StatusCake number.

Flywheel and Seravo were neck and neck with Flywheel edging out Seravo by 31ms for fastest average load time. Pressable was the slowest in 7/12 locations. 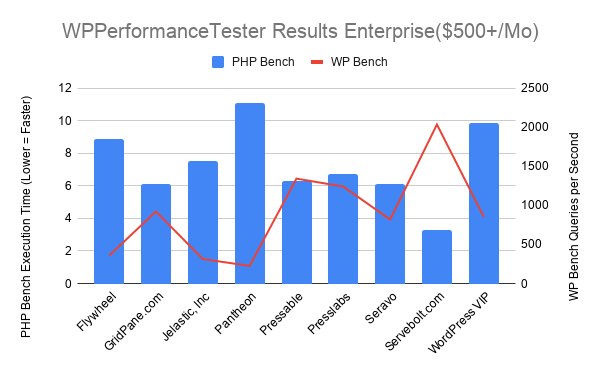 Servebolt stood out being the fastest PHP Bench and WP Bench. GridPane, Pressable, Presslabs and Seravo all had faster PHP bench scores than the second fastest company last year (Presslabs); so it's nice to see the whole field getting faster.

GridPane, Pantheon, Presslabs and Seravo all earned A+ ratings. Every single B grade was for the following reason according to Qualsys: "This server supports TLS 1.0 and TLS 1.1. Grade capped to B." 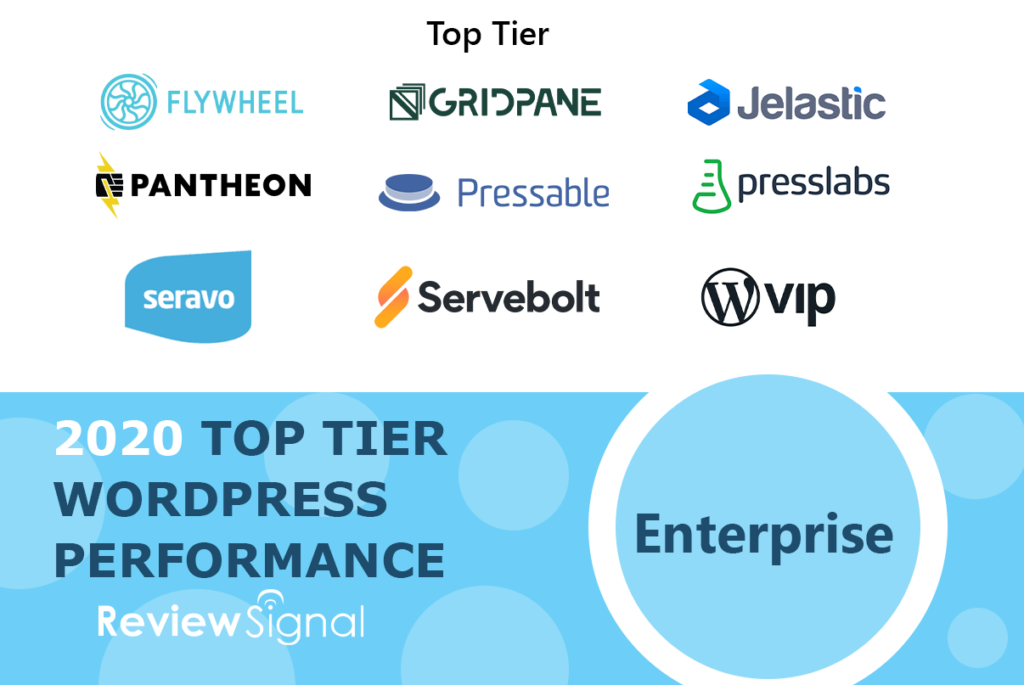 One of the new entrants in this years test, GridPane only competed at the Enterprise tier to likely send a message that says we're here and we're serious. Well the results say, welcome to the club. Perfect uptime and the second fastest Load Storm average response time combined with a miniscule 3 total errors on both load tests say GridPane is here to perform. The only improvement I would like to see is better scores on WebPageTest where outside of US/Europe it wasn't as fast as some of the competition. Overall, happy to see GridPane show us that another Top Tier Enterprise performer is here.

Jelastic competed in many tiers and I was excited to see them figure out a way to balance their slightly different billing scheme to fit into these tests. Their platform scaled all the way up to the Enterprise tier, showing that it can handle tremendous loads without struggling. It earned Top Tier recognition in yet another tier, well done.

Pressable had perfect uptime and only 5 total errors on both load tests. I'd like to see faster response times globally but it was a Top Tier performance for sure.

This small company has participated many years and continues to impress with yet another Top Tier performance. Perfect uptime. 1 error total on the load tests was the lowest total of any company. The third fastest average response time on WebPageTest. Well done Presslabs.

The third new Enterprise Tier entrant didn't disappoint. Seravo was neck and neck with Flywheel for the fastest average response time globally on WebPageTest. They had a total of 6 errors on excellent load tests. Welcome to the Top Tier Seravo.

I also wondered if Load Storm tests were getting faster, so I looked against companies that participated this year and last year on the more in-depth measurements.

The page completion time for logging in is a huge difference. in 2019 with the exception of VPWIP, logging in took 1.8-3.4 seconds. By 2020 the slowest was 1.3 seconds. The entire field became faster than the second fastest score the previous year. I am not sure why or how this came to be, many hosts in 2019 results were probably still on PHP 7.2 and were likely on 7.4 for 2020 test. But I wouldn't expect that to account for that dramatic a difference in results.

Whatever the case may be, it's nice to see even at the highest end there are dramatic improvements being made to the performance which a little closer look could unveil.